HOLOFIL is an award-winning holographic display device used for up to 5 times better user engagement than flat screens. It is primarily used for branding, marketing, education, training, and gaming.

This version has face-tracking + normal Bluetooth controller interactivity where you can interact with the 3D models using either face rotation or a Bluetooth controller to rotate, move, scale, etc. In addition, this is an LCD version where the visuals from a primary LCD are projected on a highly tuned remarkable projection glass surface with multiple unique coatings.

This is an OLED display version where the visuals from an OLED display are projected on a highly tuned remarkable projection glass surface with multiple unique coatings. OLEDs have no back-light, unlike LCDs; hence there are deeper black colors with high contrast colors. Hence, OLED holographic visualizations are crisper and high resolution than LCD-based displays.

Add to My Wishlist

HOLOFIL is the award-winning holographic display device from Amsterdam, Netherlands. Its unique design gives it a distinct visual appeal and offers the best in class visual quality for the holographic visualizations. The visual quality results from the ongoing research and development that has gone into fine-tuning different aspects of the device from an experienced team of scientists and creatives.

This is an OLED display version where the visuals from a primary OLED display are projected on a highly tuned special projection glass surface with multiple unique coatings. OLEDs have no back-light, unlike LCDs; hence there are deeper black colors with high contrast colors. Hence, OLED holographic visualizations are crisper and high resolution than LCD-based displays. 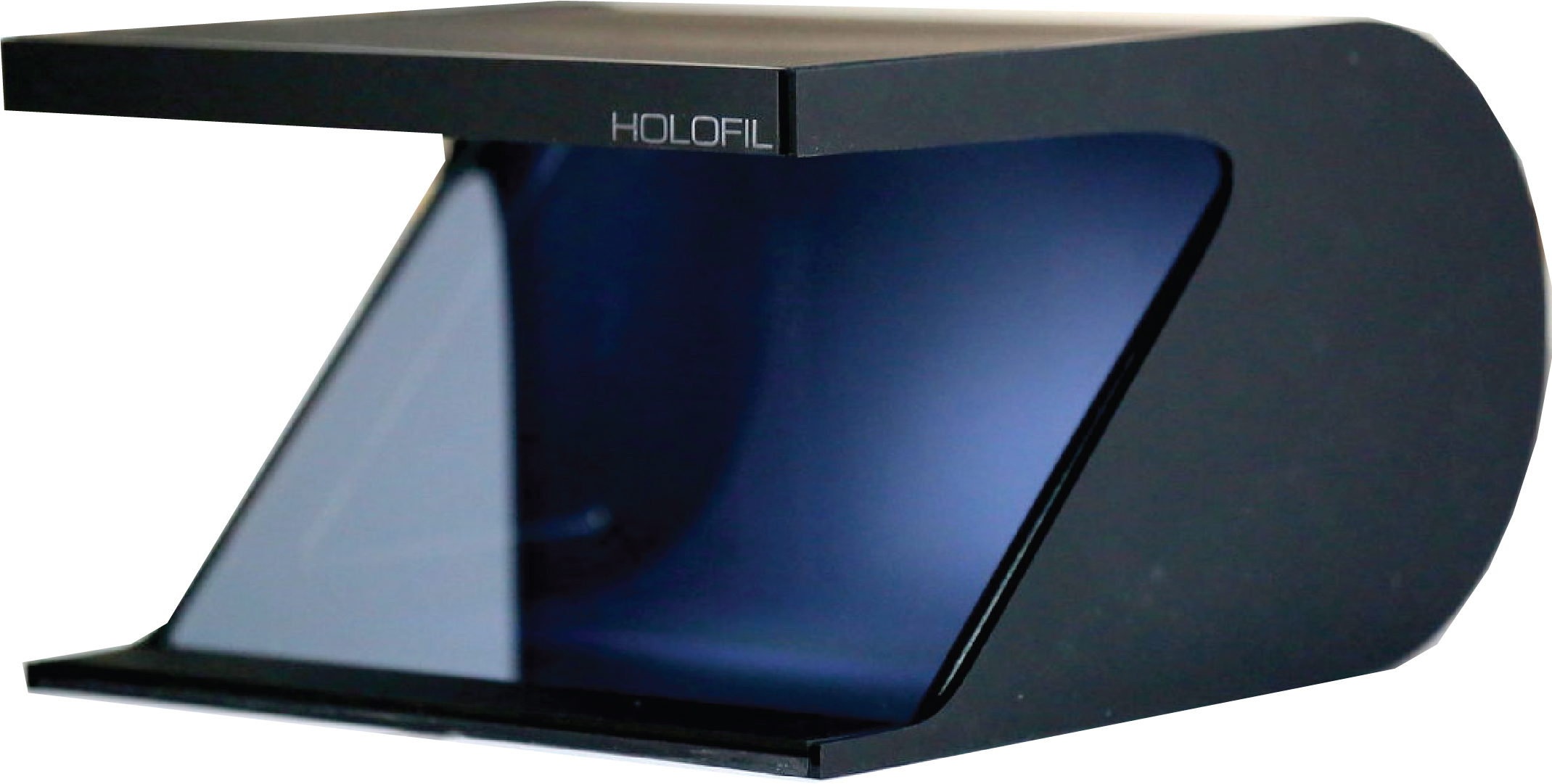 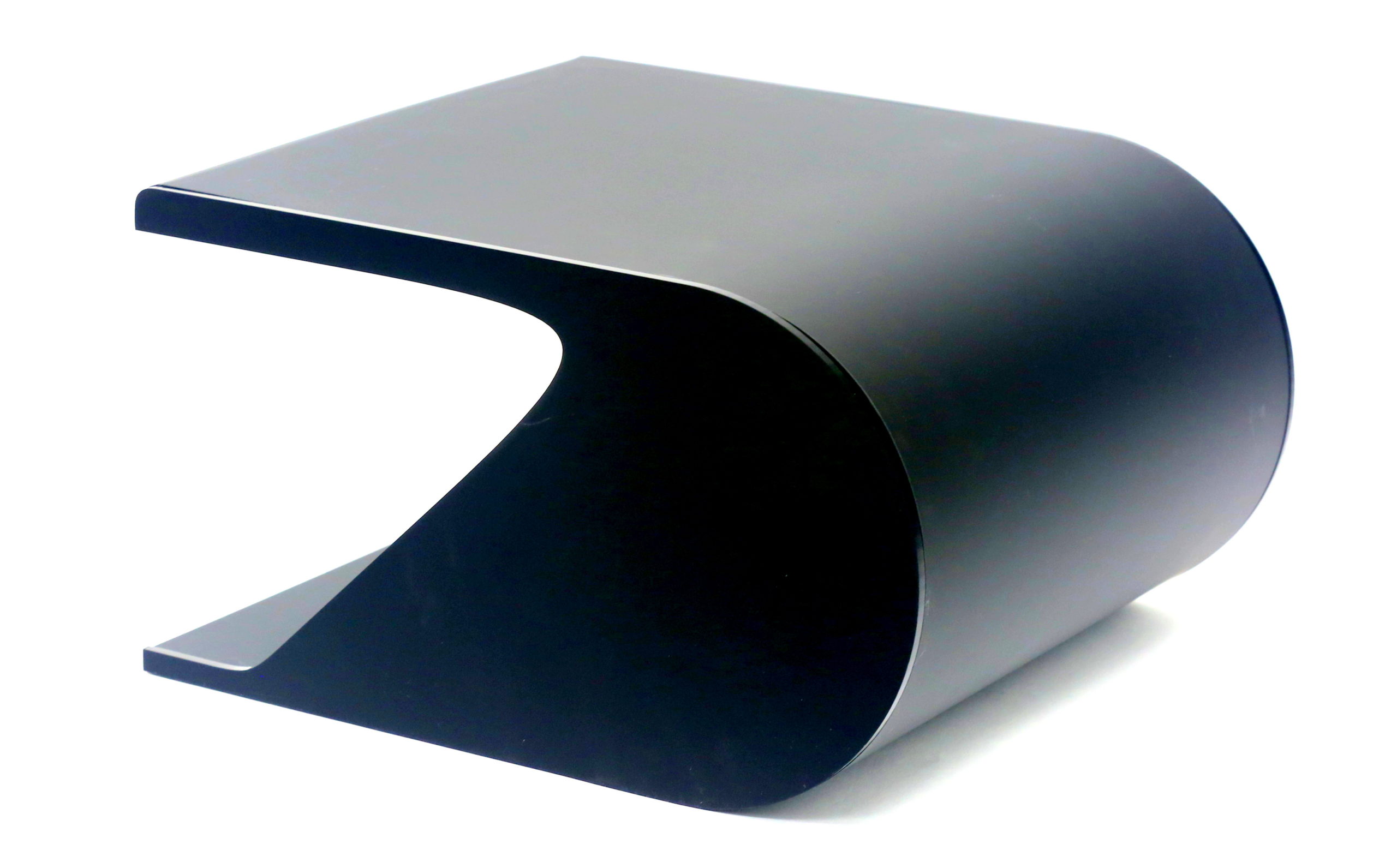 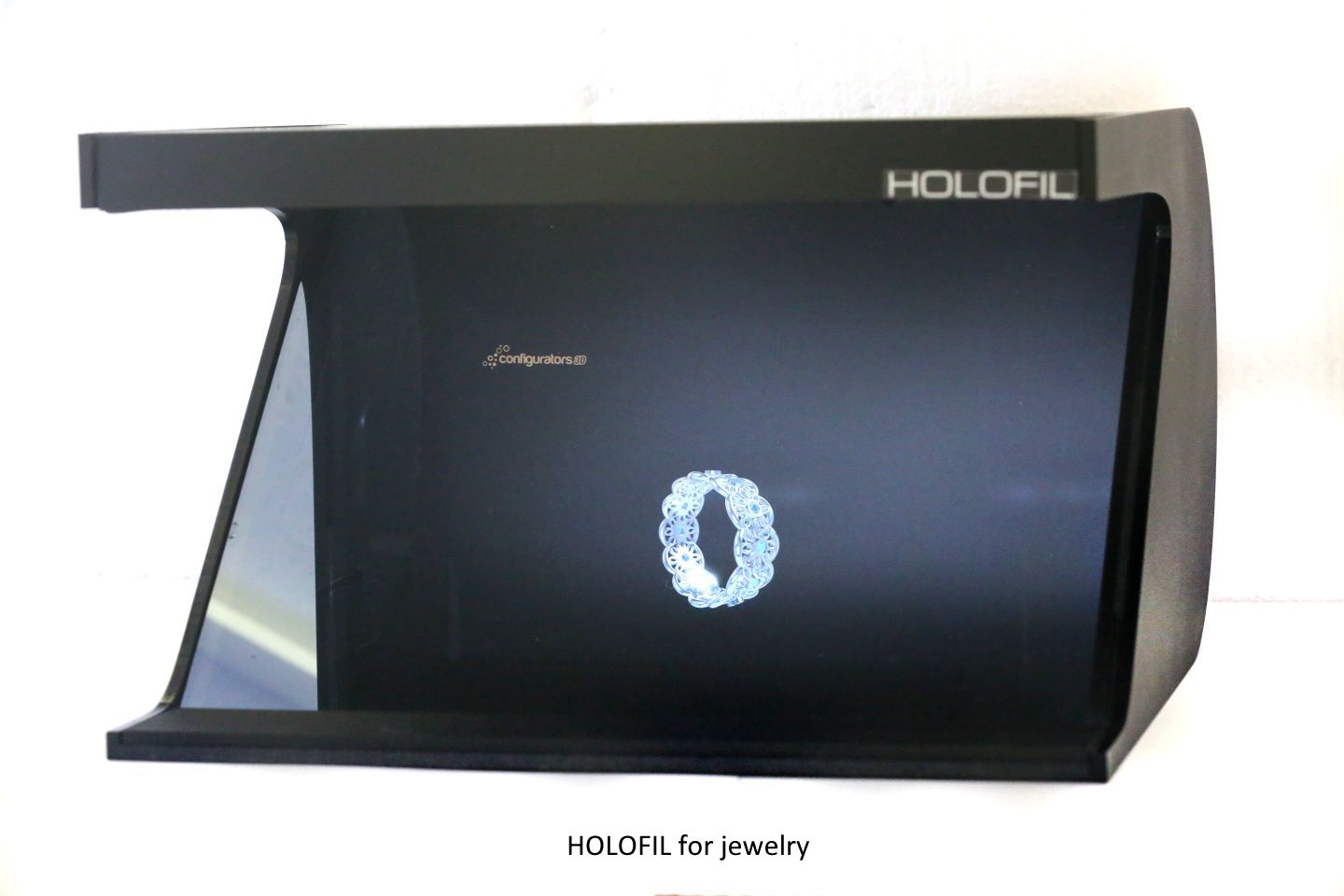 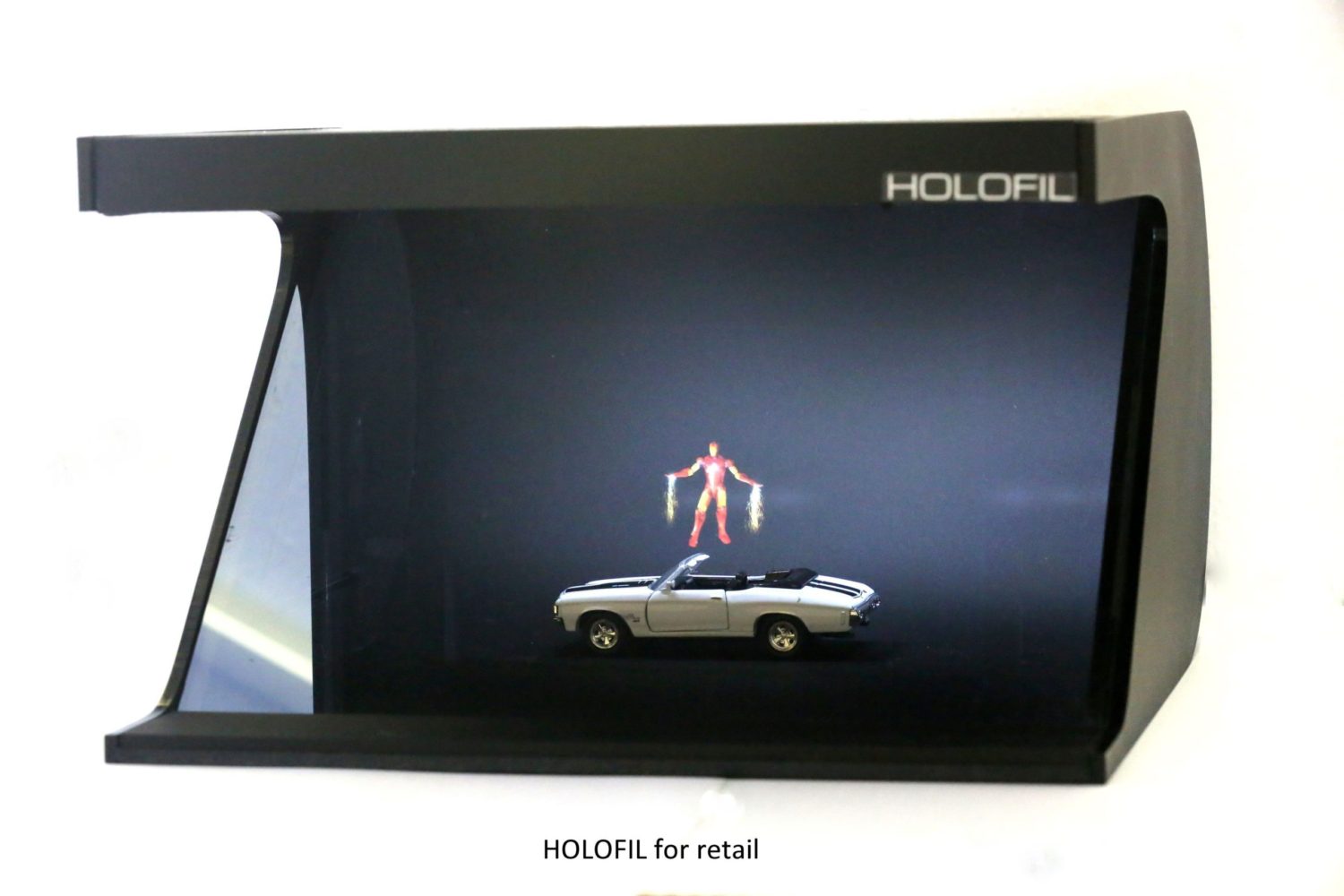 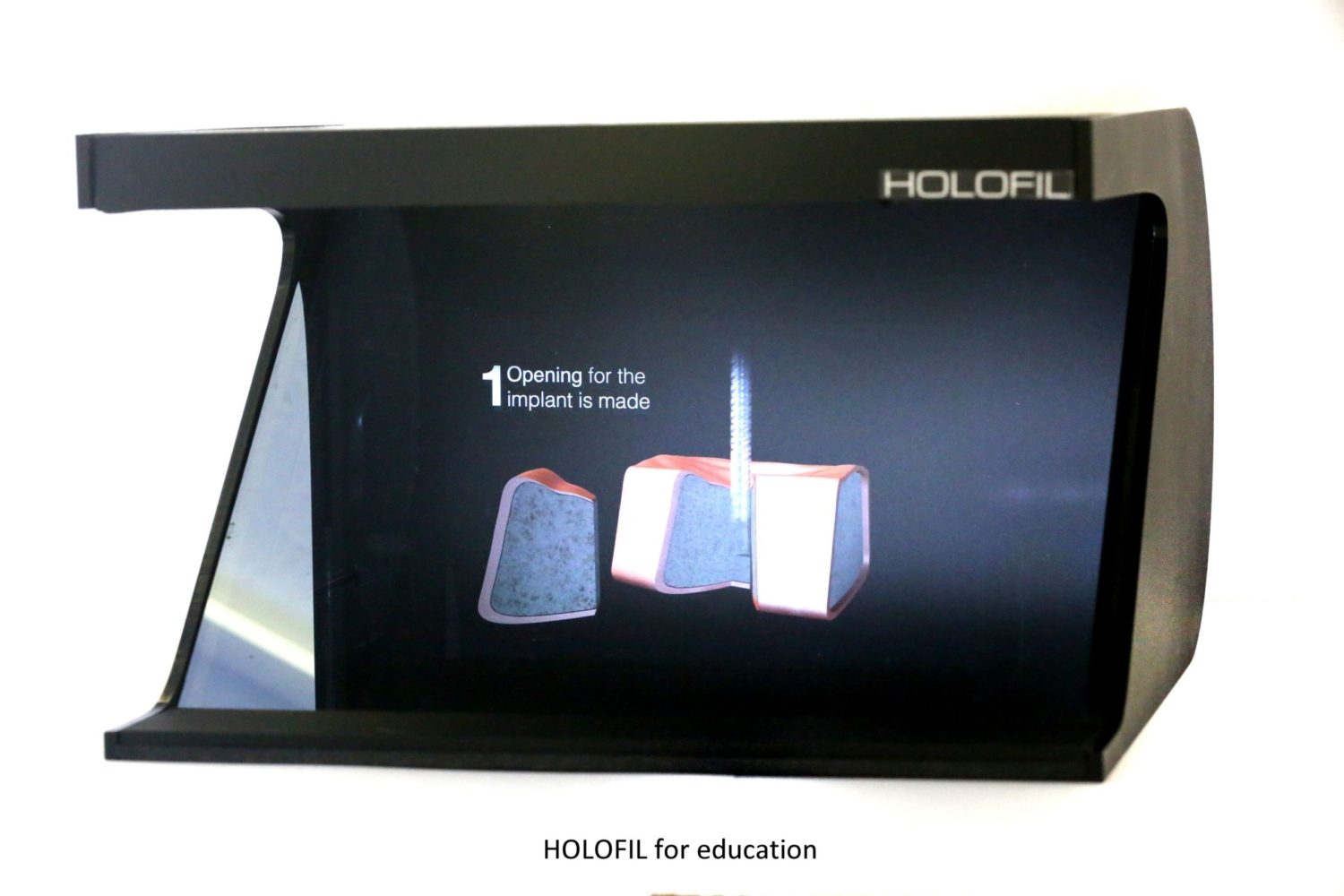 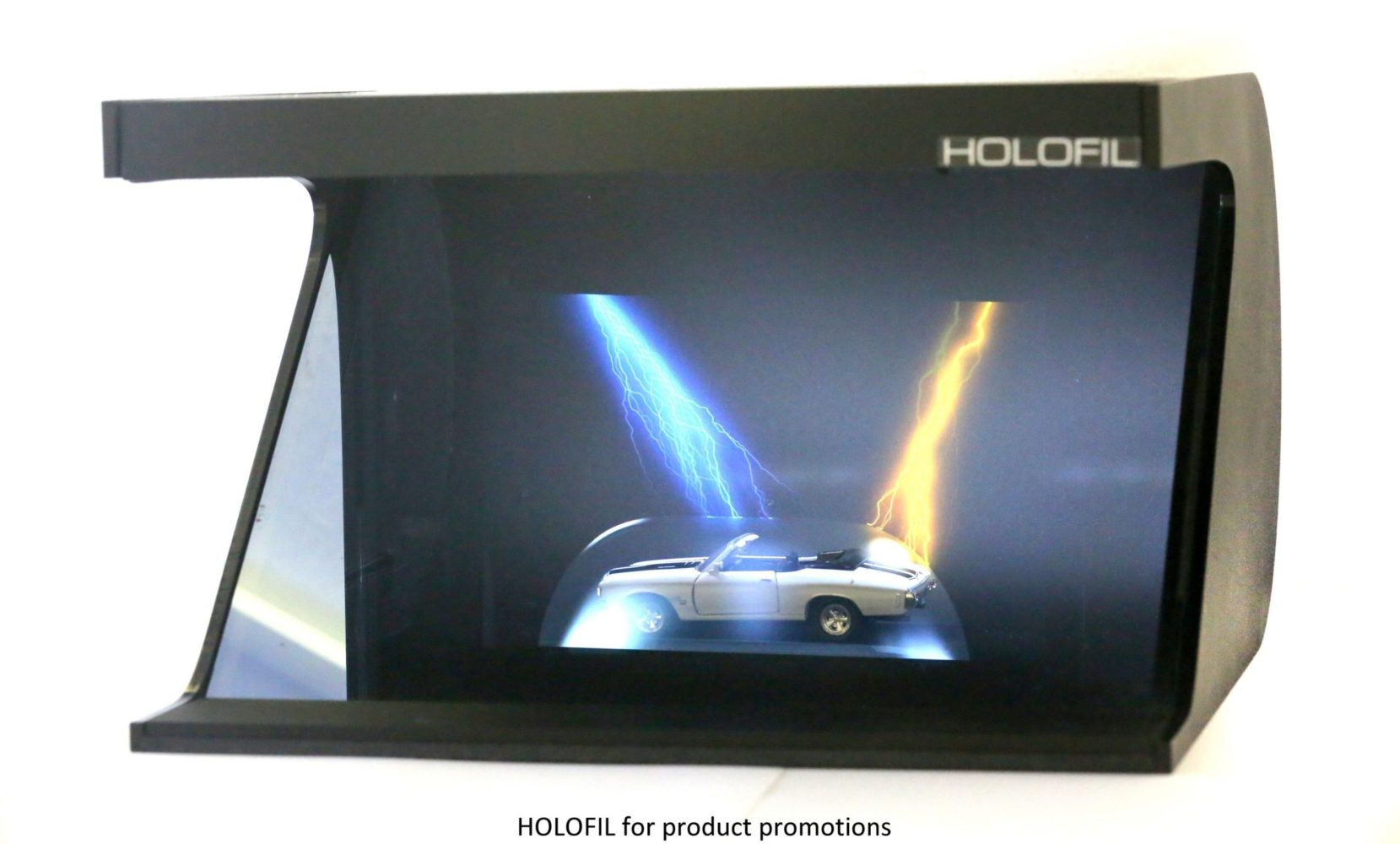 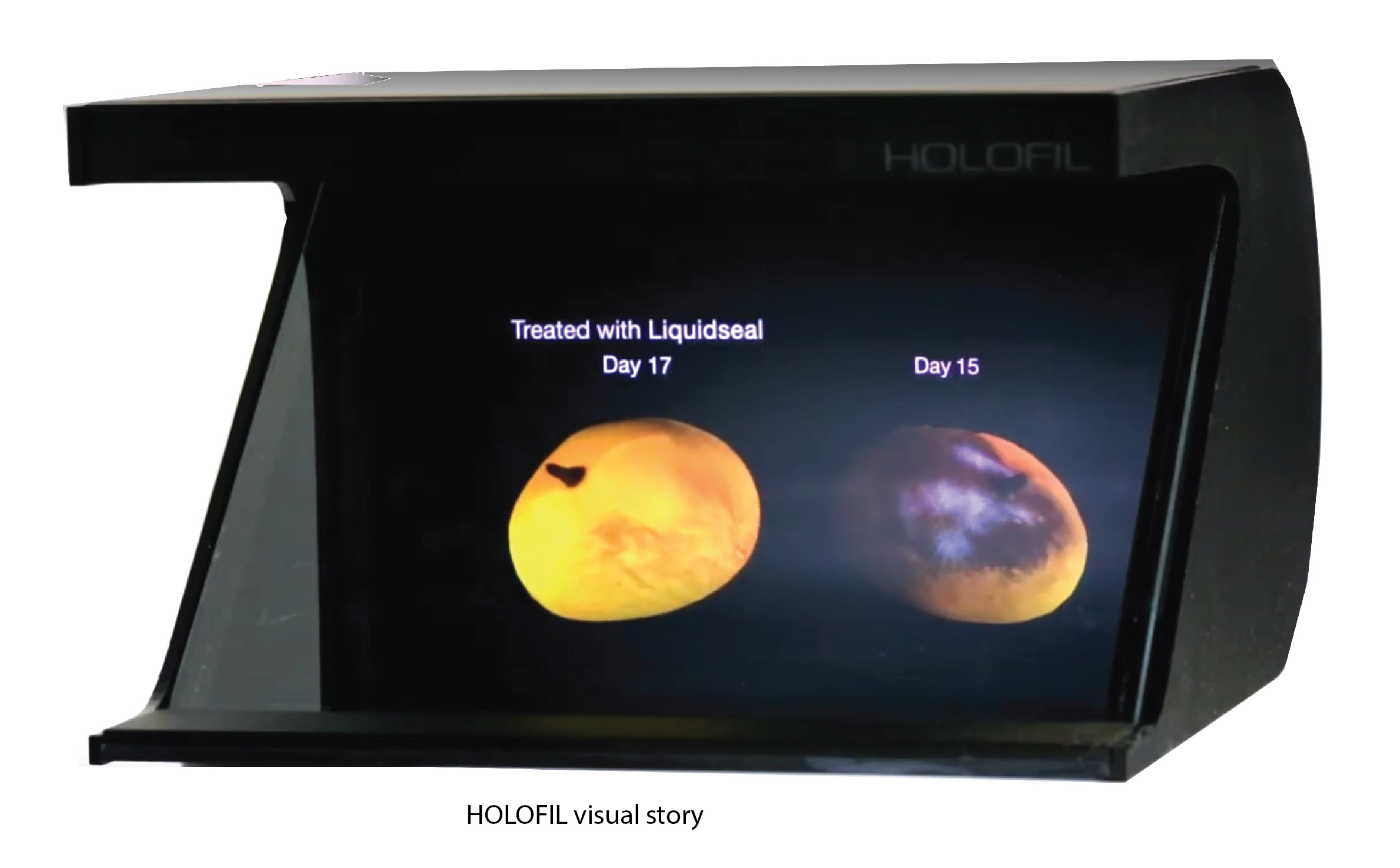 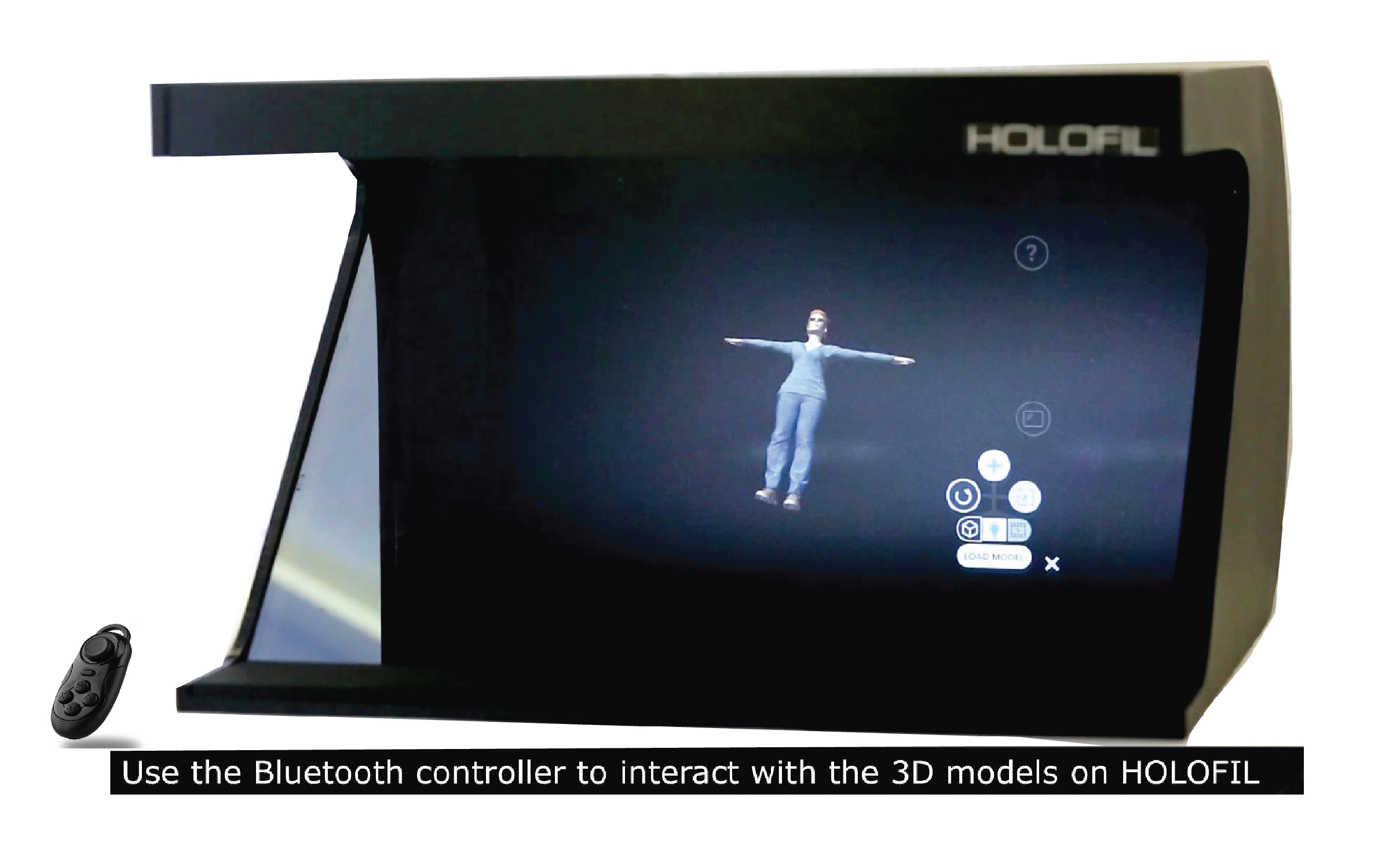 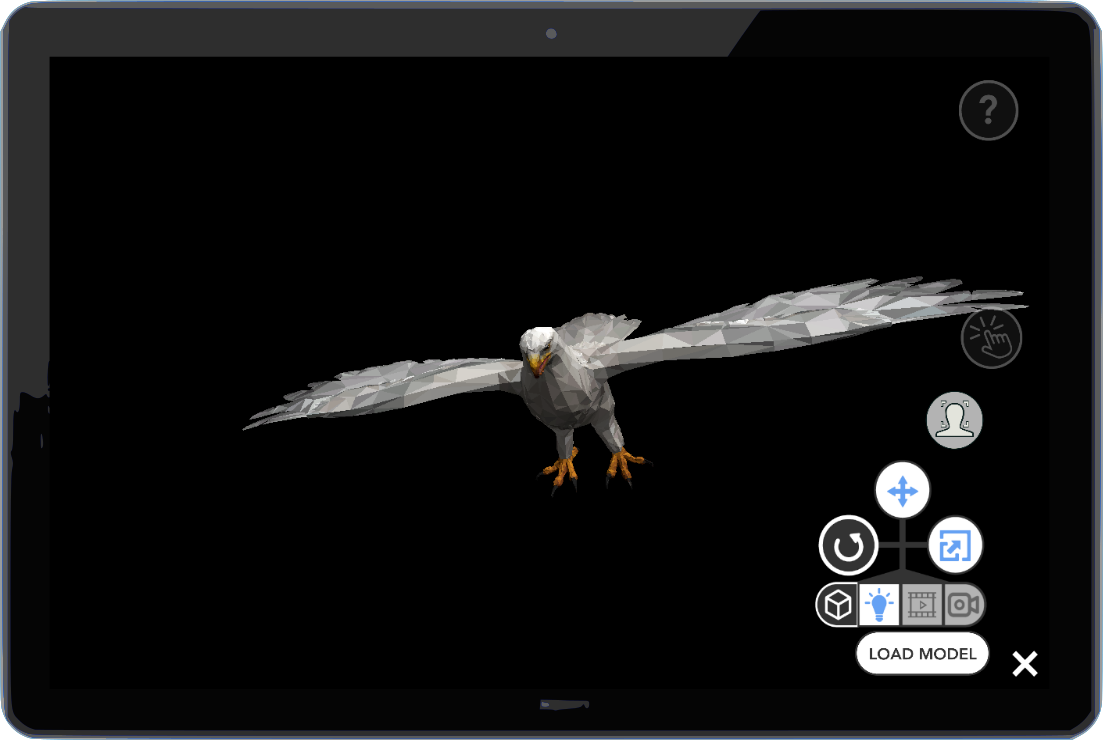 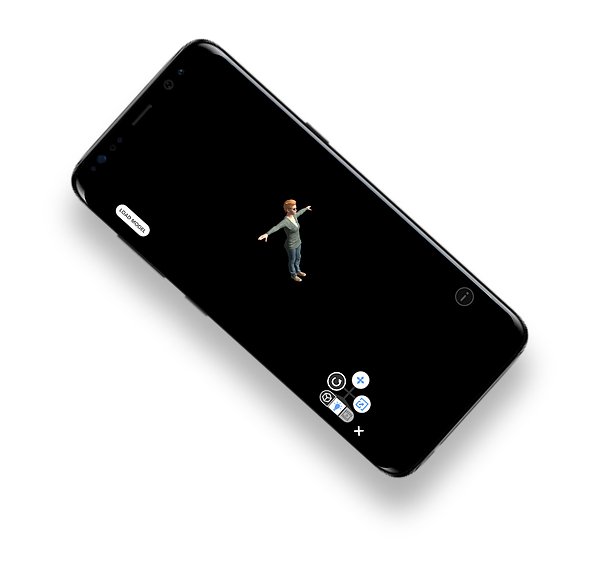 HOLOFIL-X Android app is a separate application that you can buy here, which gives you the following ability

Consider a scenario of home interior decoration where you are placing HOLOFIL in your living room, and you want to change its content every week. You can search for “free 3D  models ” on the Internet, download the appropriate format, and create simple animations that you can change as per your requirements whenever you get bored and feel like updating HOLOFIL with new content. Imagine decorating your room with different Buddha statues, museums artifacts, and other attractive 3D models from the 3D model marketplaces on the Internet such as this one. 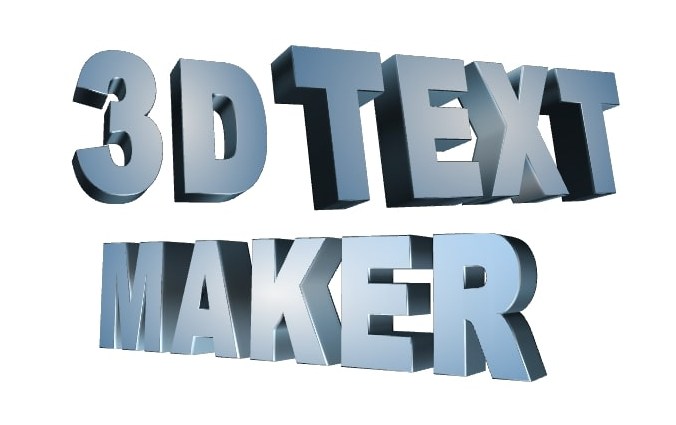 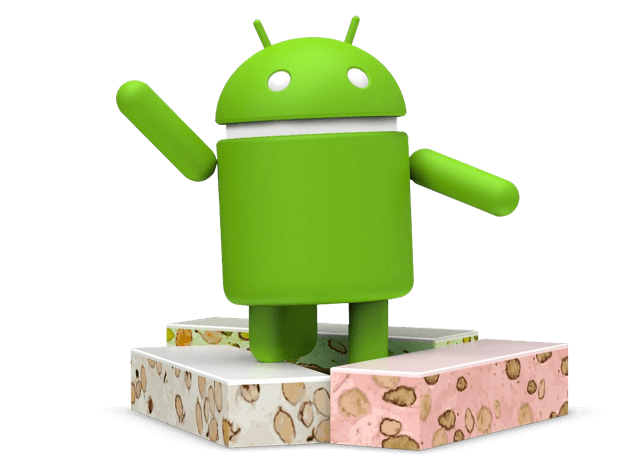 As HOLOFIL uses an Android-based system, you can create Android-based 3D games if you are a developer. It can be further used as a gaming platform to create Unity and Unreal game engine-based 3D game development where you can hook it up with a Bluetooth controller to interact with the games. In addition, you can create exciting gaming environments by combining physical and virtual content inside the device to make it look super cool, like the game example below of Chicken hunter. 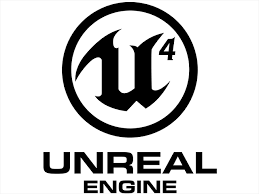 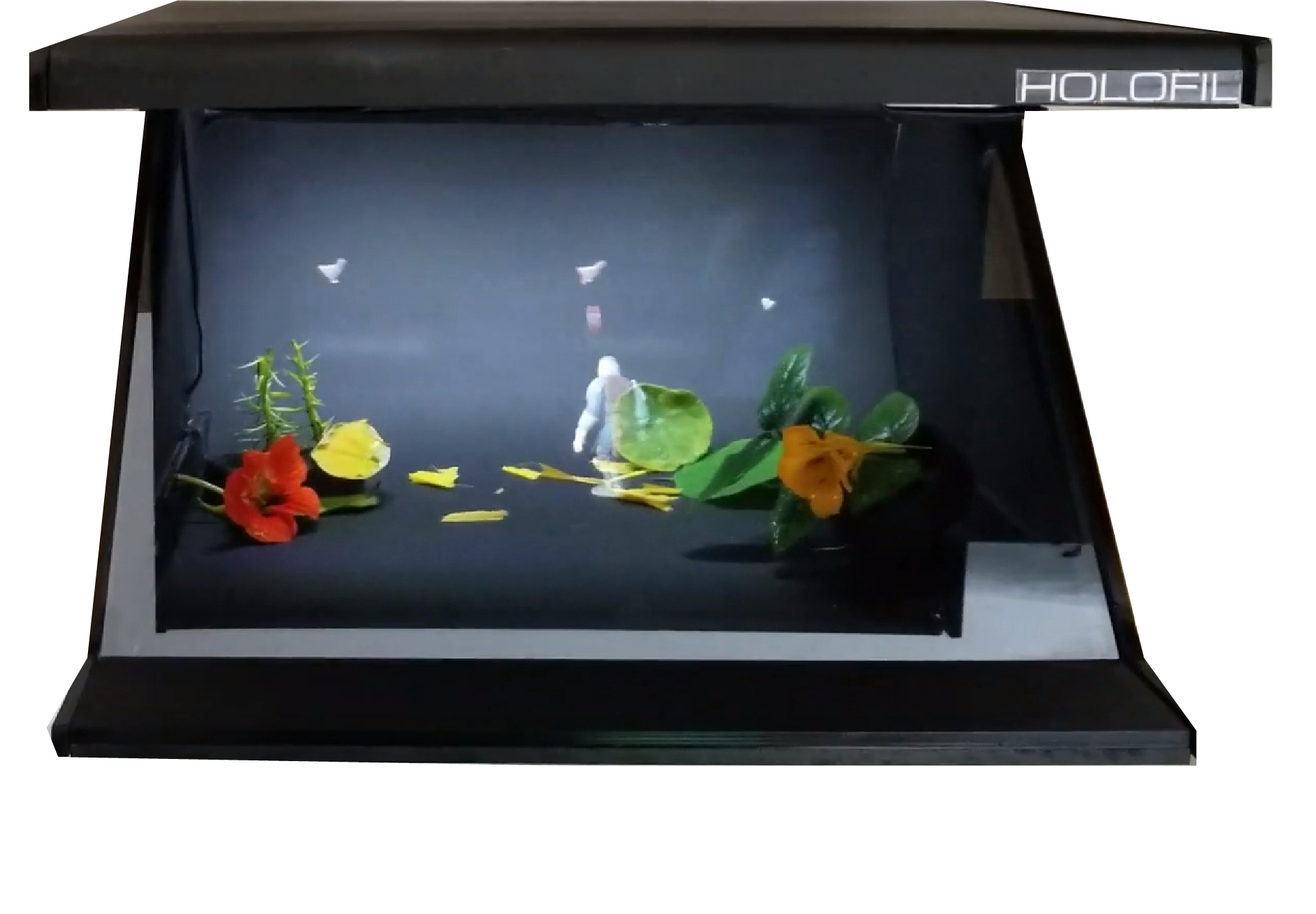 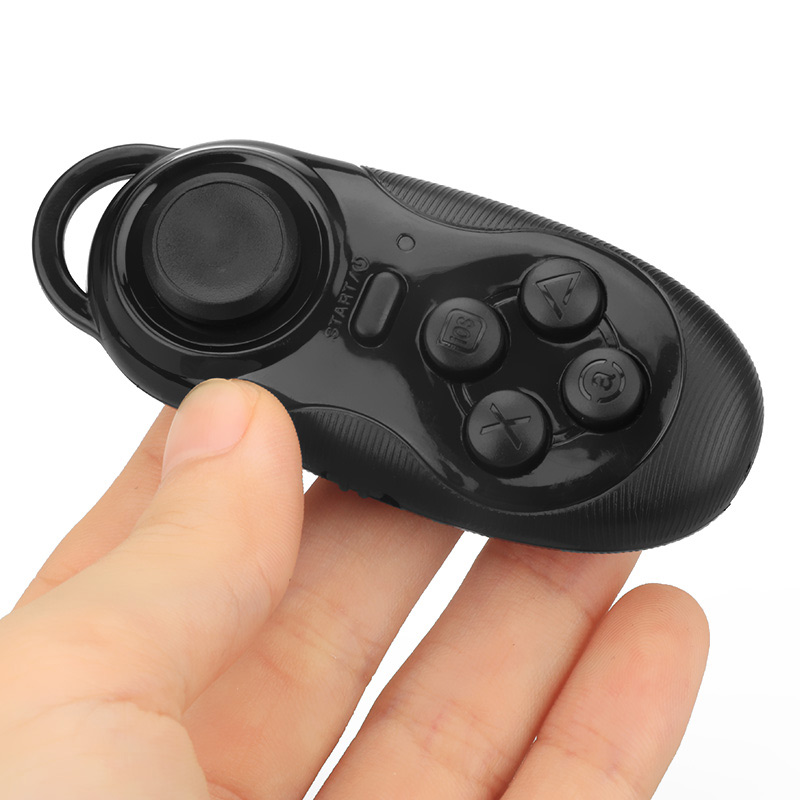 Here you see a HOLOFIL chicken hunting game designed and developed in Unity game engine and played using a Bluetooth joystick game controller. The joystick allows the hunter to move from left to right, and the four buttons allow different actions such as jumping, shooting a bullet, running, etc. You can use any Bluetooth controller as long as the game is designed with its button mapping.

In the above case, you see a mixed reality setup, where the plants and flowers inside HOLOFIL are natural physical objects and are placed inside the device physically, while the hunter and the flying chickens appear virtually surrounding them, creating a mixed reality setup making the game even more exciting and fun.

If applicable, the Product Documentation, Reference Materials, CAD design(s),.STEP file(s) and/or other drawing files, Manuals, and Tutorials will be available for download upon purchase. The order confirmation email will include a downloadable link to the product file(s), which can also be downloaded from the My Account section if needed.

HOLOFIL is an Amsterdam Netherlands based product brand. It is designed, and developed by its founder Dr. Mrunal Gawade who is a Computer Scientist himself with a PhD in Computer Science from Amsterdam, and Masters from UC Santa Cruz, Silicon Valley USA. The team behind HOLOFIL consists of scientists, creatives, and makers. HOLOFIL has been invited and participated in prestigious events around the world including CES Las Vegas, Gitex Dubai, CEBIT Germany, Hannover Messe Germany, etc. It has been ranked in top 10 in the awards competitions such as Accenture Innovation Awards 2018, Viva Tech Paris 2019, The Next Web (TNW) 2018 etc. from hundreds of participants. HOLOFIL has worldwide clients and partners. The product is designed, developed, and assembled in Amsterdam, Netherlands and shipped all around the world.

WE SHIP WORLDWIDE: We primarily ship via FedEx, UPS, DHL, EMS, TNT, and USPS because they are fast, reliable, and easily trackable. We usually ship within two to three business days after the full payment. Standard delivery generally occurs within 5 to 7 business days after the shipping date. However, sometimes delivery may take about 7 to 10 business days, depending on the shipping destination, logistics mode, weather conditions, product weight, size, or shipping company distribution structures based on re-planning, such as staff shortages caused by COVID. SHIPPING COSTS: For some industrial products, e.g., heavy wheels, CNC machines, etc., the shipping cost is calculated based on the product weight, not quantity. To benefit from lower shipping costs for orders with multiple items, don't hesitate to contact us at sales@ozrobotics.com. Our shipping rates are listed very clearly on each product page under the SHIPPING tab. Additionally, to see the shipping cost for your country, add the item to the Shopping Cart; you will see the shipping cost based on your Country and Location. CUSTOMS and TARIFFS: While not all products require customs fees, some products may require a minimal tariff if applicable in your country for orders of $2,500.00 and above. Or goods of Chinese origin subject to tariff regulations valued at over $800.00 (USD). The total amount for your order does not include a customs fee/tariff. A tariff belongs to the buyer when applicable. Why don't we add tariffs to the product's retail price? - If all countries deducted the same tariff amount, we would have added the tariff amount to the product price. However, we do not do that because each country charges a different amount, while some do not even charge. Therefore we can't add any tariff to the product's retail pricing. Oz Robotics, Manufacturing Partner, or Supplier are not responsible for tariffs. Please check the "Made In" and "Made By" labels on the product page to see the product's origin. The total amount for your order does not include any duties, import taxes, customs fees, and GST/VAT. The buyer must pay all import duties. Please click here to see more on Tariffs.

COVID: We are suspending product returns due to the current COVID-19 pandemic unless there is a manufacturing defect. Please study the product and ask us questions before you buy. Thank you. ORDER CANCELLATION: After you place an order, you have 5 hours to request an order cancellation. After 5 hours, your item(s) have either already been shipped, prepared to ship, or are currently being custom-made. It means we will not process your cancellation request after this period has passed. By placing your order, you signify that you agree to be bound by our Order Cancellation Policy. PAYPAL and STRIPE SERVICE FEES: Please note both PayPal and Stripe do not offer a refund for the service fees they charge when you purchase a product. Therefore, after placing an order, if you change your mind and ask for a refund, we will deduct the service fee for PayPal or Stripe, whichever one you used to purchase. If you have any questions about this, please contact PayPal or Stripe. EXCHANGE POLICY: Oz Robotics wants you to be happy with your new purchase. However, we abide by the exchange policy of our suppliers because we do not manufacture these products; our suppliers do. Once you used the product, our supplier(s) and we have the right not to issue a refund. Still, we will offer an exchange for the wrongly purchased items or products with serious and irreversible defects or technical problem(s). The buyer will pay the shipping fee for wrongly purchased products or any other similar issues. If the product you purchased is defective, please email us at support@ozrobotics.com with some photos or a video of the defective parts to evaluate before you send it. Click HERE for more on Refund and Replacement Policy REFUND POLICY: Oz Robotics accepts refunds on a minimal basis unless there is a manufacturing defect. For any electronic items, returns are only accepted on devices with serious and irreversible problems; meanwhile, the customer must apply for the returns within seven days from the delivery date. Before a refund acceptance, please include images or a video and any other material proof of the defect. However, we abide by the exchange policy of our suppliers because we do not manufacture these products; our suppliers do. For more info on Refund and Replacement Policy please visit Refund and Replacement Policy. Other than our supplier’s default policy, once a return is agreed upon, you can ship your defective item to the provided return address that you should receive from us first. Please ship the order in original packaging with all the accessories and additional parts. If the Required Parts are not sent back, they will be billed for or expected to be shipped at a later stage. And only once all items have arrived will our staff check the returned product for testing. Include in your package a signed letter stating the reason for your return and the original receipt as well as any mentioned proof of defect, images, or a video, etc. It will help us to speed up the process on your behalf. The purchaser (customer/buyer) is responsible for all shipping costs when returning an item. However, upon receiving the returned order, we will assess the product. If it is determined that there is, in fact, a manufacturing defect, then we will refund the shipping costs as well as repair or replace or refund the full amount to the purchaser if the product is not fixable. If you wish to return an unused product, please do so within seven days from the ship date for a refund on the purchase price, minus shipping, handling. Refunds will be credited to the original credit card used for payment in 24-48 HOURS after receiving the product back. We will charge 50% restocking fee. Once your return is received and inspected, and if agreed for a refund, refunds will be credited to the original credit card used for payment in 24-48 hours. Please note that we will charge a 50% restocking fee once you return a product without any defect. Once your refund is processed, PayPal will return the money to the card used. It may take at least five business days (depending on the bank and credit company) before your refund is posted in your bank account and statements. Contact Us if you still have not received your refund after 5 business days. Do not return your product to our New York office. For any exchange or refunds, please email us first at support@ozrobotics.com for us to provide you with the steps that need to be followed. Any product you return must be in the same condition you received and returned in the original packaging without being used. Please keep the original receipt. More on Refund and Replacement Policy.

Upon submitting your question, your email will include the product link automatically.

Sell Worldwide with Oz Robotics. Find new buyers in the United States or Go Global. The Simplest Way to Sell your innovation worldwide. Reach out to millions of new customers to increase your sales through paid advertising. Sell your Hardware, Software, and Subscription based Apps. See Details

You’re already sharing so many things online without making any money! So why not share our products and earn an extra income when visitors buy. Details