Ganker is a small intelligent robot that meets the fighting and entertainment which has a strong ability to play and operate.

Add to My Favorites

Face-to-face real fighting as well as an immersive experience. A small-sized high-performance motion skeleton was used，numerical the electronic judgment system distributed all over the body. Subvert operating experience of traditional toy robots. 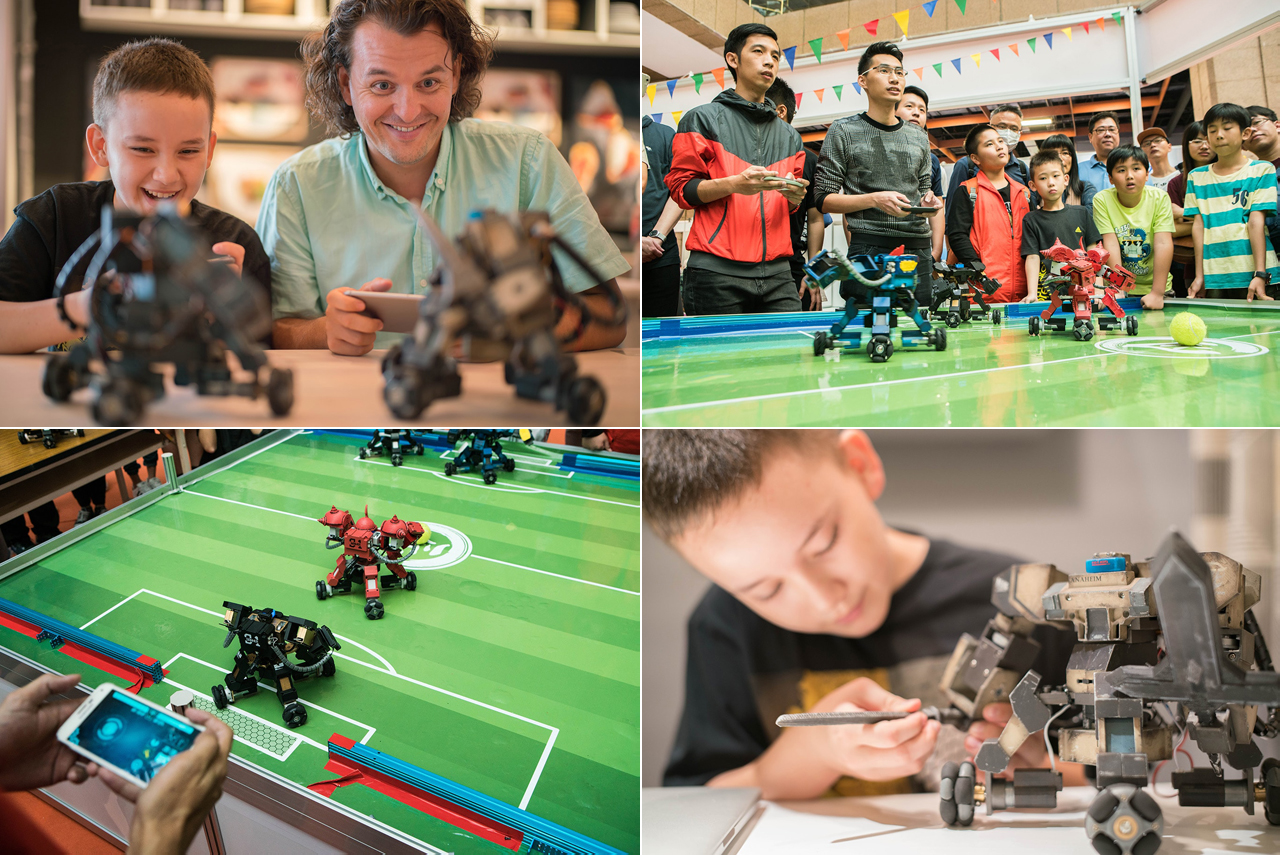 Ganker is a collection of fighting and entertainment in a small competition robot using the robot joint motion module, electromagnetic induction module, the front end of the operation module, fighting robots, soccer, racing, obstacle avoidance, and other sports. Competitive by robots, and interact with their parents, friends, and professional players. At the same time, players can assemble a complete Ganker within 10 minutes, in the mobile terminal and the robot control APP appearance to the players left a huge DIY space, the player can be programmed to self-fighting action by APP through 3D printing and design your own unique robot appearance.

With its modularized designs, users can assemble a fully functional Ganker Robot by themselves within 10 minutes. And many DIYs can be done in the controlling and the outfit of Ganker Robot. Users can set different fighting movements through mobile apps, as well as design their own Ganker outfit with 3D printing, during which you can make fun out of active learning.

Most traditional battle robots are made of plastics, which have shorter durability and look less like robots. And the easy controlling and little DIY potential make them more suitable for younger users. And with a patented robot joint movement module, electromagnetic sensor module, and user controlling module, GJS Ganker Robot is a smarter robot for the entertainment market.

Ganker is agile and fast. It can attack opponents fast, and every physical attack can be captured by on-board sensors and be fed back to the mobile controlling app. And the battle result will be decided by subtracting points, which is much more interesting and feasible.

Users can assemble, refit their own robots, or make a 3D-printed outfit for them. And every fighting movement of Ganker can be set independently, making it a perfect robot for users of all ages. Ganker has various components for easy upgrades. It will be equipped with a first-person camera, iFLYTEK voice controlling system, and artificial intelligence in the future, making it an all-around entertainment-service robot.

Be the first to review “Ganker Robot for Entertainment, Sports, Competitions and Education – Blue” Cancel reply

If applicable, the Product Documentation, Reference Materials, CAD design(s),.STEP file(s) and/or other drawing files, Manuals, and Tutorials will be available for download upon purchase. The order confirmation email will include a downloadable link to the product file(s), which can also be downloaded from the My Account section if needed.

Battle your friends, customize your robot, and create the ultimate fighting machine. Ganker Robots: The Future of Fun! Ganker Fighting Robot is the Ultimate Combat Machine!

EXCHANGE POLICY: Oz Robotics wants you to be happy with your new purchase. However, we abide by the exchange policy of our suppliers because we do not manufacture these products; our suppliers do. Please read the product exchange policy defined by each supplier for their own listed product(s), which can be found under the Shipping tab on each product page. Once you have used the product, our supplier(s) and we have the right not to issue a refund. Still, they will offer an exchange for the wrongly purchased items or products with serious and irreversible defects or technical problems (s). If wrongly purchased products or any other similar issues, the buyer will pay the shipping fee. If the product you purchased is defective, please email us at support@ozrobotics.com with some photos or a video of the defective parts to evaluate before you send it. Click HERE for more on Refund and Replacement Policy REFUNDS/RETURNS: Oz Robotics accepts returns on a minimal basis unless there is a manufacturing defect. For any electronic items, returns are only accepted on devices with serious and irreversible problems; meanwhile, the customer must apply for the returns within 7 days from the delivery date. Before a refund acceptance, please include images or a video and any other material proof of the defect. However, we abide by the exchange policy of our suppliers because we do not manufacture these products; our suppliers do. Other than our supplier’s default policy, once a return is agreed upon, then you can ship your defective item to the provided return address that you should receive from us first. Please ship the order in original packaging with all the accessories and additional parts. If the Required Parts are not sent back, they will be billed for or expected to be shipped at a later stage. And only once all items have arrived as a full system can we check the returned product for testing. Include in your package a signed letter stating the reason for your return and the original receipt as well as any mentioned proof of defect, images, or a video, etc. This will help us to speed up the process on your behalf. The purchaser (customer/buyer) is responsible for all shipping costs when returning an item. However, upon receiving the returned order, we will assess the product. If it is determined that there is, in fact, a manufacturing defect, then we will refund the shipping costs as well as repair or replace or refund the full amount to the purchaser if the product is not fixable. If you wish to return an unused product, please do so within 7 days from the ship date for a refund on the purchase price, minus shipping, handling. Refunds will be credited to the original credit card use for payment in 24-48 HOURS after receiving the product back. We will charge 50% restocking fee. Once your return is received and inspected, and if agreed for a refund, refunds will be credited to the original credit card used for payment in 24-48 hours. Please note that we will charge a 50% restocking fee if you want to return a product without any defect. Once your refund is processed, then PayPal will return the money to the card that was used. It may take at least 5 business days (depending on the bank and credit company) before your refund is officially posted in your bank account and statements. Contact Us if you still have not received your refund after 5 business days. Do not return your product to our New York office. For any exchange or refunds, please email us first at support@ozrobotics.com for us to provide you with the steps that need to be followed. Any product you return must be in the same condition you received and returned in the original packaging without being used. Please keep the original receipt. More on Refund and Replacement Policy.

If you have any questions with regards to this product, please ask us here. This will include the product link automatically.

Affiliates – You’re already sharing so many things online without making any money; why not share our products and make money when your visitors buy. Join Now

Freelancers – Generate Revenue by Offering Your Freelance Skills on OzRobotics.com. Contact Us